Video Is the New Audio

For ten years, RH Consulting has produced the “Networked Audio Products Report” which is used by folks across the AV industry to understand the progress towards interoperable audio over IP. As the years have passed, audio over IP has matured, and Dante has come out a far-and-away leader in the field, being included in over 75% of all networked audio products today. For 2022, the report has started to track the progress of competing video over IP standards. The guest of last week’s SDVoE LIVE! episode, Roland Hemming, authored the report, and he sees interesting parallels between where video over IP sits today, and where audio over IP was positioned 10-15 years ago. This post offers a recap of the discussion between Justin and Roland around the report and what we might learn about the future of networked video from the history of networked audio. And by the way—guess which video over IP ecosystem came out on top in the report? Yup, SDVoE! 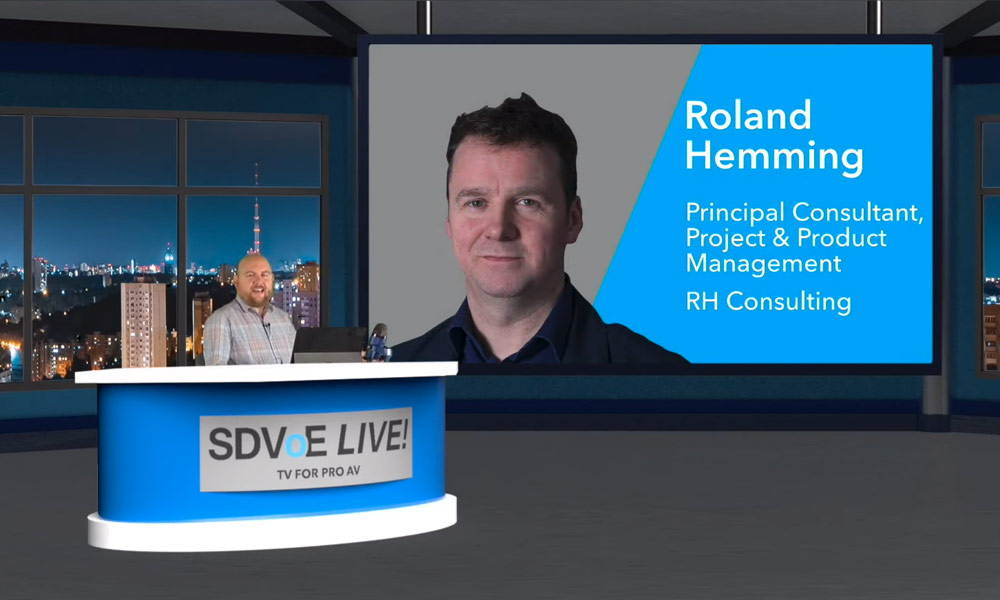 Justin wondered, “What in the world made you decide, some 10 years ago did you decide—I’m going to count every networked audio product I can find and make a list.” Roland explained, “It was discussions about AVB. There was a huge about of publicly about AVB; from about 2009, major companies were involved, everybody was talking about it. But there did not seem to be any reality. There were all these discussions about it being the next big thing.” So, we wanted to find out. Our initial research uncovered there were about 50 companies supporting it but only found 21 products. We realized there was a difference between the hype and the reality. The research has always been focused on, what is available to use.

Looking back over the last 10 years, what have you learned? What are the trends that came out of this?

Roland shared, “We’ve seen massive adoption” by hundreds of manufacturers with thousands of products plus real integration of the products on the network. Also, the products that were converters, basically turning audio on and off the network and converting it to analog at each end are no longer the majority.

The report seems to highlight the competition between the networked standards. But we’ve actually always considered that the real competitor is analog. And even now we still think that the vast majority of audio systems out there are analog, we think maybe 10% of the entire professional audio market is networked.

We are continuing to see the need for everything in professional audio to shift to the network. And that shift is coming, driven by a few pivotal products—that are networked only—which is somewhat forcing people down that route.

The pro AV industry has embraced SDVoE Academy as their trusted resource as we blend AV and IT technologies to take full advantage of off-the-shelf Ethernet switches to realize greater system flexibility and scalability over traditional approaches such as point-to-point extension and circuit-based AV matrix switching. Since its inception in 2018, SDVoE Academy has attracted more than 5,000 students and served more than 25,000 lessons over more than 100 different online courses in video technology, network basics, and system design across a variety of vertical markets. We’re building a strong community around the SDVoE Academy forum where SDVoE members, designers, developers and end users can mingle, share tips & tricks, answer questions, and solve problems together. And it’s all free!

Two professional certification programs, for SDVoE Design Partners and SDVoE Developers, have together graduated more than 1,600 students with the goal of enabling great AV user experiences. And again, it’s all free!

Join us every other Tuesday at 1 PM ET (New York) for a fresh episode of SDVoE LIVE! in SDVoE Academy or on THE rAVe Agency’s LAVNCH platform.

Laura Hunt
Laura Hunt is the marketing and communications manager for the SDVoE Alliance. She is a content-marketing practitioner with a background in market research, consulting, and project management across a diverse set of technology disciplines in the high-tech industry.
Recent Posts
Subscribe to our blog
Enter your email address to be notified whenever a new blog post has been added to our website: