AV in Higher Ed: Where Is the Industry Headed?

The printed book was the first widely-adopted piece of learning technology. Perhaps the hybrid classroom is the latest, but what does the future hold for higher ed and AV?

Justin Kennington, President of the SDVoE Alliance interviewed Joe Way, President of HETMA (the Higher Education Technology Managers Association) and a practitioner in higher ed tech at the University of Southern California, during a recent episode of SDVoE LIVE! The conversation focused on the trends of the last few years in higher ed technology: What has changed? What hasn’t changed? And where is it all headed? Here are the highlights of the conversation. 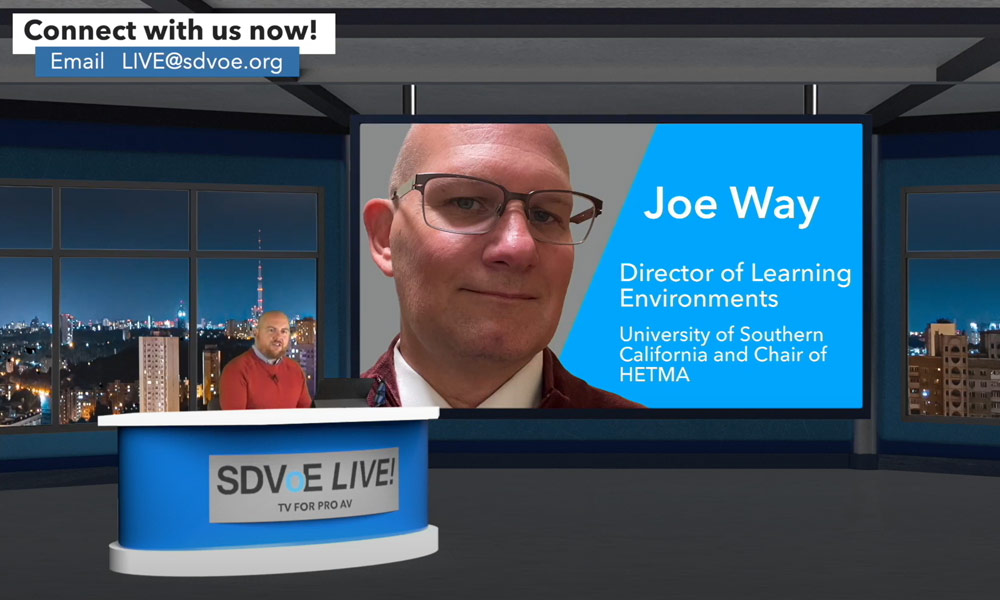 Joe explained, “HETMA, the Higher Education Technology Managers Alliance, is an advocacy group that was created in order to be able to advocate and speak for the needs of the higher education vertical within the greater AV industry.” Professionals within the higher ed vertical consider themselves inhouse integrators. We recognized the need to be able to advocate for ourselves and speak about the specific needs of higher ed tech. HETMA was established for that purpose.

Justin noted that professionals in the higher ed tech space seem to possess a do-it-yourself kind of spirit. There are many talented AV people in the corporate space that do a good job of owning and managing their space, but it seems they rely more on their consultants and integrators than the university guys. What’s that about?

Joe explained, “I’ll tell you there is a secret behind the scenes. We recognize that we are tighter and closer to our end users than most in other verticals.”

As people working for an institution, we have our own customers. We can’t just have a consultant come in to design the system and an integrator do the installation, then leave because we’re the ones having to deal with the system later. We’ve recognized our unique position to be able to speak for those who are going to use the space. So, we serve as a mediator; when our integrators come in, we are the voice of the constituents who will be using the space. And we are the professionals who are going to support the ongoing use of the space and technology.

One of the other benefits of HETMA is our backend channels, we’re not alone. There is a great community behind the scenes. Therefore, we can get together and “think tank” for ourselves; we can ask our backend slack channels, “Hey, I have this problem. How have you solved it?” For any given request, 20 or 30 different schools may chime in saying, “Well, this is how I did it. Look at this product. Here’s a specialist, an SME that I used, why don’t you reach out to them?” There is a network that can problem solve and support one another in a way that is unique in the AV industry. This type of collaboration does not necessarily exist in other verticals in the AV industry.

Most private companies would be reluctant to call their competitor and say, “Hey, how did you solve this?” Right? They are going to rely on other channels; professionals in higher ed AV don’t face those types of competitive concerns. “Our schools might compete against one another for students. But as tech managers, within the institutions, we’re all colleagues, whether it be small schools, larger schools, private schools, public schools, whatever, we all face similar challenges. And therefore, we recognize that we can come together and support one another in that way. So that’s the secret sauce behind the scenes.”

Justin commented, “I’ve never thought of the last point you touched on that the corporate guys fundamentally are out there competing with each other. And there’s a spirit of collaboration, of collegiality among universities and educational institutions that is just fundamentally different than what the for-profit corporate world is out there to achieve. That’s fascinating.”

Acceleration of Trends in Higher Ed

It is apparent that the last couple of years have vastly accelerated trends that existed. And introduced new approaches towards hybrid learning environments, unified collaboration, and the ubiquitous use of Zoom or Teams. So, what was it like to suddenly have the imperative to train and support your users around all this new technology they were forced to adopt?

Joe explained, “It was the most frustrating, confusing, scary, and exciting time that we could ever have imagined in higher ed.” The feeling was that technology advanced five years in five day…and it was true. In higher ed, we were primed for a rapid adoption rate as the industry was already considering technology like software-defined ecosystems, as well as UC and AV-over-IP technologies. These technologies were in use, but mass adoption was the missing piece. It took a major global event for that mass adoption to happen as we moved to hybrid learning. We had a “problem” to solve! Content needed to be delivered globally in real time. We also had a continued imperative to support our customers, the tuition paying students. We never gave that notion a thought when we were in the classroom.

One of the pressing questions became, how are we going to deliver content without anyone in the classroom? We quickly recognized the solution was tech platforms. UC platforms and network technology were already in place. The next question was how can everyone adopt these platforms? We then saw a shift to everyone being online and campuses where empty. Administrators were asking higher ed tech manages, how are you going to solve this dilemma to get content to a dispersed community. In the past, tech managers needed to push and argue to adopt technology and procure the budget to implement it. But this was a new environment, government was throwing money at every school saying, “Here, you need to upgrade. You need to solve this problem. How are you going to do it?”

And just like that, higher ed tech managers had a voice at the table. We had to rethink how were we going to implement rollout and adoption of these technologies. Higher ed tech was now presented with an opportunity to utilize this unique situation to advance our own campuses, potentially advance tech year’s ahead of where we expected to be. This new reality demonstrated what hasn’t changed: the primary need for information and community within the higher education environment. Begging the questions: “Okay, where is AV? Where is the technology going?

Where Is Tech in Higher Ed Headed

Within the AV industry, the buzz was software-defined and network-defined everything. The higher ed tech vertical realized they had a key opportunity to take advantage of these types of technologies. The classrooms were empty and would be for a year or two. We had the time and the room to upgrade and thought, “Let’s put this in and let’s go for it.” And we had the need and ability to implement new tech in volume; we had to upgrade hundreds of rooms.

How Has the Conversation Changed?

Justin wondered next, “Were there any major trends that were running along in 2018, 2019, that suddenly got derailed? If your community was no longer heading in the direction of that trend, what happened next?”

Joe noted, prior to the global event that sent us all home and online for every interaction, the higher ed IT vertical was considering flipped classrooms. Could we set up rooms with six screens around them and collaborate in teams instead of a single lecture out to the hall? We now hear crickets around that topic. Why would we need that function now? Everybody’s screen is the laptop they bring into the room, right? How can we deliver content to that and not the screens around the room? How can we deliver content to them via an LMS system rather than through a PowerPoint playing? No one at that time was talking about Zoom or Teams in the classrooms. And that is one of the major changes, online collaboration and content dissemination are the conversations we are having now.

AV in Higher Ed Tech in the news

Justin brought our attention to recent news articles about technology in higher ed.  Find links to them in SDVoE Academy on the archived show page AV in Higher Ed: Where Is the Industry Headed?

Laura Hunt
Laura Hunt is the marketing and communications manager for the SDVoE Alliance. She is a content-marketing practitioner with a background in market research, consulting, and project management across a diverse set of technology disciplines in the high-tech industry.
Recent Posts
Subscribe to our blog
Enter your email address to be notified whenever a new blog post has been added to our website: