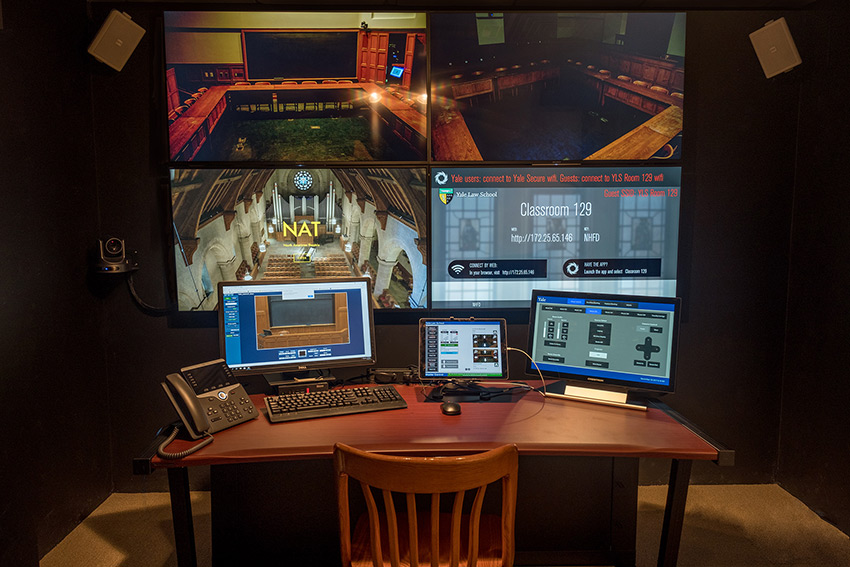 Yale University’s Sterling Law Building is the home of the Yale Law School in New Haven, Connecticut. Built in 1931, the venerable structure occupies an entire city block in the heart of the campus.

When it came time to update the facility’s AV infrastructure and prepare for the future, system integrator North American Theatrix, whose relationship with the school goes back more than a decade with work on theatrical and performance spaces, got the contract.

Daniel Griffin, the Associate Director of the Media Services Department at the Yale Law School, sees the Sterling Law Building as the tip of the spear in the law school’s transition to matrix-style AV distribution on IP infrastructure. The building will serve as the template for the rest of the law school’s classroom infrastructure and, in the future, may become the model for the rest of the university.

The first phase of the project called for installation of high speed links between two classrooms and a central control room, with connectivity to eight more classroom spaces in nearby Baker Hall to follow.

However, before the voyage to the future could begin, some very familiar and conventional processes had to take place – namely pulling a lot of wire. Specifically, a lot of Berk-Tek fiberoptic cable – multimode fiber for shorter runs and single-mode for the longer ones – had to be pulled after first removing decades’ worth of copper and coaxial wiring. “We had to do a lot of crawling around in old plaster and millwork… it’s an old building,” Pat Nelson, COO of North American Theatrix, recalled. 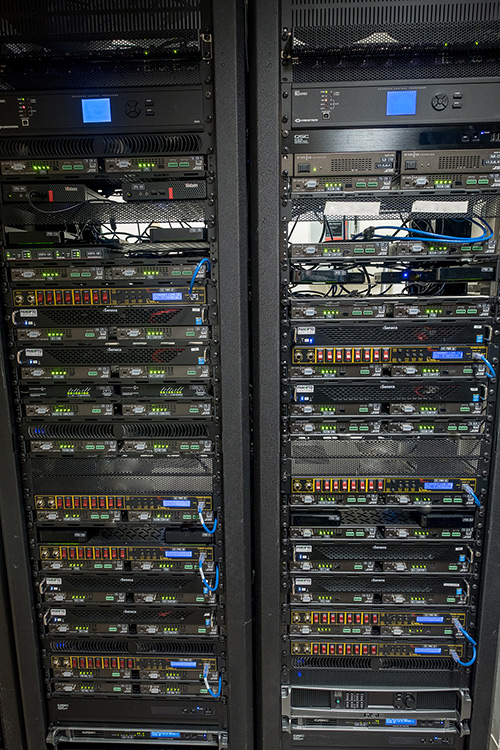 According to Nelson, a project that combines old-fashioned wire fishing with high speed data networking is an inflection point for the industry as it begins to transition matrix switching away from traditional circuit switches to more flexible packetized infrastructure. “What we’re doing is getting buildings like this prepared for the future,” he stated.

Key technology elements of the system include IDK’s IP‐NINJAR SDVoE-based distribution system that eliminates a traditional AV switcher from the signal path, and Extreme Networks’ X870 Series Ethernet switches. The equipment is housed in a pair of racks located in a control room where a Crestron touchscreen provides an interface to control the system.

“We’re in a transition from switchers to switches,” Griffin observed, noting that the shift to an IP-based infrastructure is actually resulting in media closets that are less cluttered as result of the elimination of hardware such as media switchers. “It’s pretty much just the IDK IP-NINJAR endpoints and control box, the graphics engine, and an Extreme Networks switch in the service closets now,” he said. That has also greatly reduced the need for cooling and ventilation in those spaces. And, in an architecturally curated structure like the Sterling Law Building, that has a number of collateral benefits.

Actually, Nelson said, they are more precisely transitioning from an intermediate step in the evolutionary process…from what would have been an HDBaseT matrix just a few years ago. The goal, in any event, was to connect the document cameras, audio systems and projectors in two classrooms in the building with a new central control room in the same building. The new 10Gb network is the foundation for an expanded network, which will incorporate more classrooms and eventually extend to other locations on campus. Certain system components, such as the Extreme Networks switch, were chosen with that expansion in mind. It offers 96 10Gb ports, only half of which are being used in the initial iteration of the system. 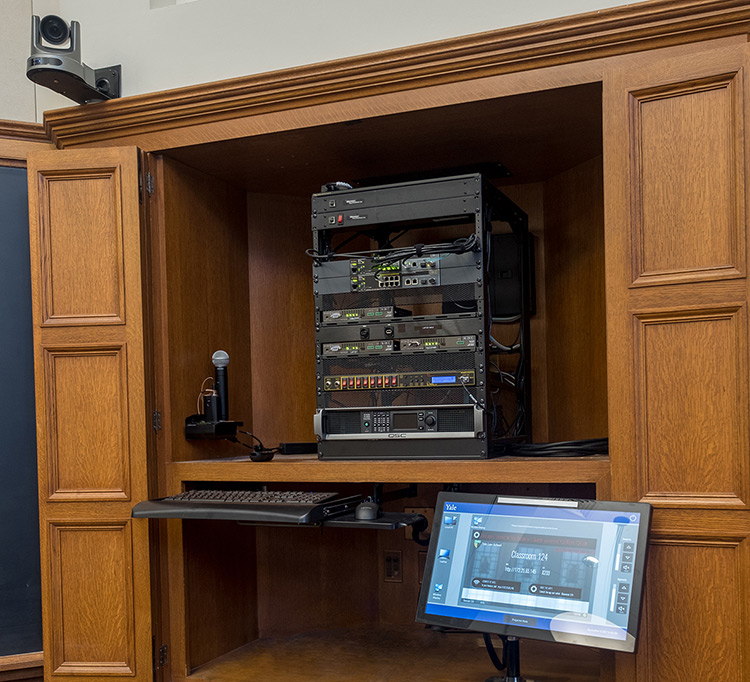 “The IDK IP‐NINJARs act like the typical HDBaseT transmitters and receivers we used to use, in that they take audio and video from an input device to a projector,” Nelson explained. “Now, manufacturers like IDK are using SDVoE technology, which allows the transmitters and receivers to run over network cabling to an Extreme Networks switch to the IDK CTB computer, which issues commands for transmitters and for routing. So, there’s no switcher or scaler anymore. That’s the beauty of this approach—no need for a switcher, and you get infinite scalability.” Nelson said that this configuration also allows a switch to so-called soft codecs, such as Skype, WebEx or Zoom (the Sterling Law Building system uses Zoom), which do away with hardware-based transmission codecs and which keep the entire ecosystem in a virtual environment.

There’s no switcher or scaler anymore. That’s the beauty of this approach – no need for a switcher, and you get infinite scalability.

Shifting matrix functionality to Ethernet means fewer hardware components in the AV data-transport system and more software-controlled functions. According to Griffin, the school has entered into a service-level agreement with North American Theatrix to manage those software aspects going forward. “So much of the AV system is becoming networked and, thus, remotely accessible,” he said. “That will make troubleshooting and maintenance easier.”

This case study is an adaptation of a feature published in Sound & Communications and written by Dan Daley. It has been adapted with the publisher’s express permission.