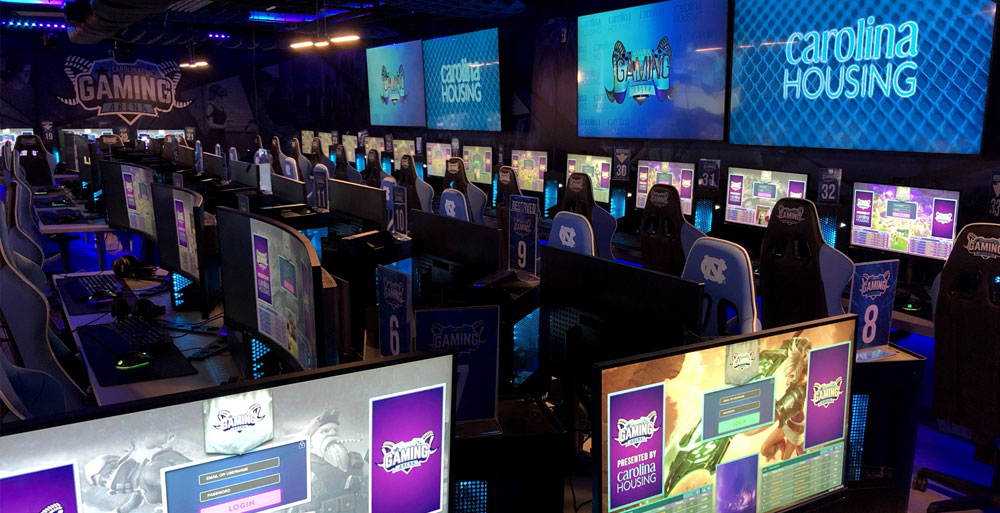 The Carolina Gaming Arena at the University of North Carolina at Chapel Hill (UNC-Chapel Hill) is a place for students to come together, find others within the on-campus gaming community, and celebrate everything students do in the area of gaming, be it social, academic, or research oriented. UNC-Chapel Hill has put targeted programming and support models in place to support healthy gaming practices and curtail the negative effects of gaming. The classes, which will be taught out of the gaming arena, will include a research study. The facility is also home to Carolina’s competitive esports teams for Rocket League, Valorant, Counter-Strike: Global Offensive (CS: GO), Dota 2, League of Legends, Rainbow Six Siege and Overwatch.

“At the end of the day, if all that happens is that a student comes down to the arena and they’re impressed and they have a lot of fun hanging out, then that’s fine, as well,” says Lee Hyde, ResNET director for Information Technology Services at UNC-Chapel Hill. “It all contributes to their success.”

“The goal of the Carolina Gaming Arena is to reach as many people as possible to share a message about gaming and an experience that is welcoming, lowers toxicity, increases diversity, and supports students where they already are,” explains Hyde. “We wanted a space that would attract the most diehard competitive player, as well as someone who has no interest or perhaps is a bit timid about entering the world of gaming. We needed a facility that would really wow people and attract them down to the arena to engage with the gaming community here at UNC.”

One primary goal in the design of the Carolina Gaming Arena was to make the arena accessible and friendly not just for players, but also for the viewing community. Hyde and his team therefore needed a simple and intuitive control system that would allow students to interact with the technology in the room with ease. He envisioned an interface that would allow students to grab video from any gaming system or PC in the room, bring it to a specific display, and consume the experience of someone else playing.

Hyde and his team did extensive research into solutions. They made visits to sites on both U.S. coasts to determine the experience they wanted to achieve with the new Carolina Gaming Arena. He consulted with various mentor groups and technology supplier CDW and repeatedly heard that he should consider Black Box.

“We weren’t sure about the execution options or what the experience would look like, but we were pretty much sold on Black Box as soon as we spoke to their team,” says Hyde. “The company’s MCX AV-over-IP system was essentially the perfect solution that we had brainstormed on our own — without realizing it actually existed.”

The Black Box MCX products are built on SDVoE technology to harness the power of Ethernet for matrix-switch quality and performance without limitations. Serving as a single network solution that enables converged networked AV, MCX delivers up to 4K 60Hz 4:4:4 video uncompressed over 10GbE with extremely low latency and switching times. The Black Box system makes it possible to handle video walls and video extension (point-to-point and point-to-multipoint) on a traditional IT network, with intuitive control over how content displays on every screen. As a software-controlled system, MCX brings flexibility and infinite scalability that allows for unrestricted system expansion.

According to Hyde, the most attractive aspect of the Black Box MCX system is that it can be deployed and extended very easily and without reliance on a matrix switcher in an equipment closet. He had limited space available for housing AV devices and didn’t want to add additional cooling for that equipment. In addition to eliminating the need to run HDMI lines, he created a distributed architecture and minimized the amount of equipment that could fail during operations.

“If you have power where you need it to be, you just run an Ethernet cable, connect MCX devices on either end of the network, and you’re good to go,” says Hyde. “The only requirement of using MCX is that it runs on a 10 Gbps network, and we are a CAT6A campus, so it’s just seamless over the same network infrastructure we already have in place. And, honestly, it would be incredibly easy to run a network cable if we did need an additional location.”

The MCX system controls audio and video signals for nine Samsung 55-inch monitors, three video columns made of up two Samsung 46-inch monitors mounted in portrait mode, and 13 Samsung 4K monitors of various sizes for content distribution across viewing areas. The fact that MCX has zero image lag is also tremendously valuable in the gaming environment, where exceptionally low latency is necessary.

MCX allows users to handle video and audio separately, so the Black Box system made it easy for Hyde and his team to amplify audio in different zones of the arena without a lot of extra components. Along with audio and video, MCX decoders and encoders handle serial and USB distribution. 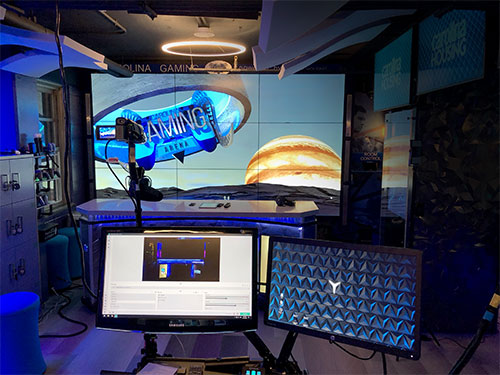 “We have 29 screens plus a ton of other devices throughout the room to manage, and it was important — and surprising to us, frankly — that the MCX devices so easily could send signals, serial commands, or other commands to each of those devices,” adds Hyde. “We can instantly turn on the room or turn it off without having to walk around and individually control devices.”

Today, when a student walks into the arena, they can use a Black Box touch panel and graphical user interface to select any computer or game console listed on the screen and choose the screen on which they’d like to watch game play. Hyde and his team can customize the appearance of the touch panel and change its configuration over time. With MCX decoders installed in the nearby Carolina House Creative Labs, students are able tocan produce content from the arena for streaming on the Carolina Gaming YouTube and Twitch channels.

By giving students and other visitors to the Carolina Gaming Arena straightforward control over video distribution, MCX lowers technical barriers to participation in the gaming community. It also helps UNC-Chapel Hill offer a unique environment and experiences that students don’t necessarily have available to them anywhere else.

“We have a mission to make sure that gaming is open and free to everyone, and that it is as easy to interact with as possible,” says Hyde. “MCX devices are definitely helping us achieve that goal.”

Hyde plans to expand the use of MCX in the future. He can quickly and simply run additional decoders out to other locations throughout the building or across the greater UNC Chapel Hill campus. He is working with Carolina Athletics not only to support teams within the gaming arena, but also to bring a larger esports tournament into an athletic facility such as the Dean Smith Basketball Center. Looking ahead, he also hopes to add a larger gaming arena in the next several years.

The Carolina Gaming Arena’s deployment of MCX and SDVoE shows how the latest software-defined AV-over-IP systems can ease universities’ entry into the world of esports. Offering flexibility, scalability, and unparalleled performance at an attractive price point, MCX serves as a highly adaptable solution that can change and grow with the needs of the institution and its student body.

Black Box has been a world-leading provider of premier IT infrastructure solutions for more than 45 years. Today, the company continues to design and manufacture award-winning pro AV, KVM, cabling and networking products known for their advanced functionality, flawless performance, outstanding reliability and fail-safe security. Black Box solutions are used every day in government, education, commercial enterprises and any other organization that requires the utmost quality and performance from its IT infrastructure.

In addition to creating industry-leading products, Black Box demonstrates every day a complete commitment to providing its customers with the industry’s best technical support and service. The award-winning dedicated support staff at Black Box works around the clock to ensure that customers’ systems are always up and running optimally. The world-class support and service provided by Black Box is as important to the successful IT, communications and business operations of customers as the powerful products and solutions the company delivers.