I love tradeshows (and not just for the awards). Besides seeing cool new products, tradeshows are where you reconnect with your industry, exchange insights with people in your market space and speculate about the future. Seven years ago I speculated right when I co-founded AptoVision. My intuition was telling me that pro AV needed to switch to signal distribution over Ethernet rather than continuing to use proprietary systems that were so inflexible. I would like to say I experienced a lightning bolt of genius from above, but no. I looked at all the other industries transformed by Ethernet and concluded pro AV would be no different.

Fast forward to the present, and yes, we’re seeing AV over IP. The speculation has now turned to which standard is going to win.  SMPTE 2110 is the front runner in broadcast but what about pro AV? Can SMPTE 2110 be a player here to? After all, we’re talking about audio and video over IP in both cases. 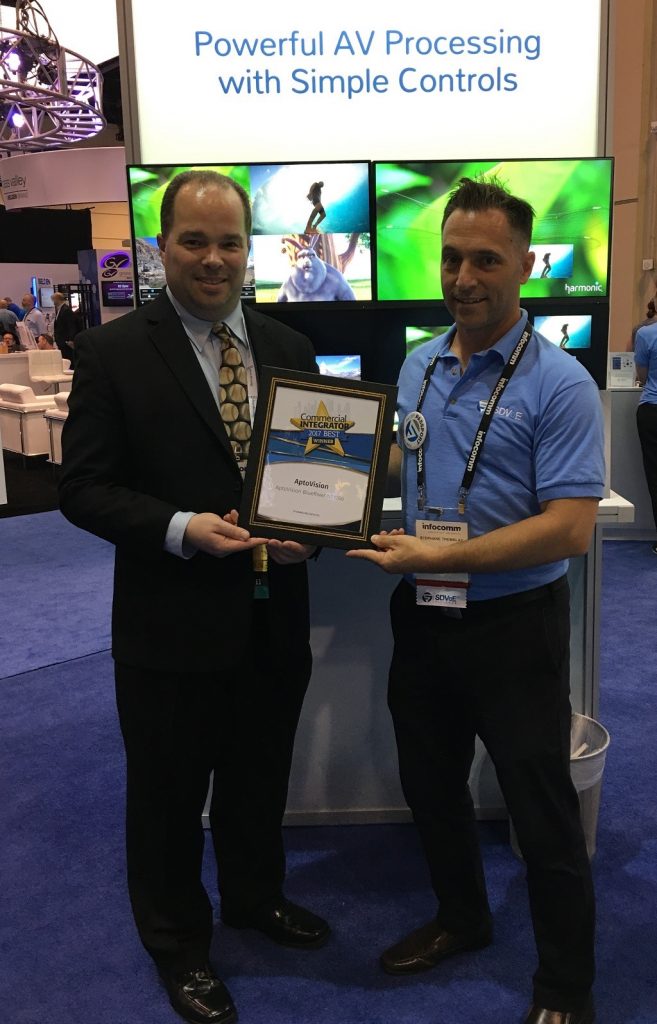 I don’t think so. While significant work has been put into SMPTE 2110, its focus is on the requirements for live production workflows. Pro AV is different, with fundamentally different requirements.

Some would say that SMPTE 2110 in and of itself has issues – that it’s immature, maladapted, was released too early and now all problems need to be fixed by NMOS. But its inapplicability in pro AV goes deeper than that.

I suspect a root reason is the backgrounds of the people and companies that are driving SMPTE 2110 development. If you ask broadcast hardware engineers to design video over IP, you’ll end-up with a broadcast standard. Just imagine asking a Formula 1 team to design a minivan – it will be fun to go for groceries until you realize there is no place for your shopping bags!

Getting down to details, let’s start with the obvious. SMPTE 2110 “on its own” does not really work. The specification is already fractured into video (2110-20), audio (2110-30), ancillary data (2110-40) and a separate “stream” of timing data (2110-10 / SMPTE 2059) basically using PTP driven network timing. None of this defines what’s on the channel. It’s not “in-band” signal information. Without the Session Description Protocol (SDP) providing a text file with the definition of what is really in those streams, they are meaningless raw data channels.

Back to my tradeshow experience. I recently heard a funny story from a technician connecting SMPTE 2110 gear together in his booth. He scratched his head because nothing was working. This despite the fact that everything had been thoroughly tested and triple checked back at the office. Turns out, it was indeed working, just taking forever to display. Of course when you are used to SDI and you see an image upon connecting, you need to adapt to your new SMPTE 2110 reality!

Wait, it gets worse. The SDP and how this is controlled is not even a part of the scope of SMPTE 2110. This is where 2110 absolutely needs to enlist the help of NMOS to be interoperable (or not). Getting different vendors’ devices to talk to each other is a bit of an adventure in real life. Different vendors have extended the protocol to their liking or interpret SDP differently. Then there are still the issues of security and large scale discovery.

While NMOS will be an important step towards a simplification of the setup process for large-scale systems, a true IP network will involve more pieces than just NMOS and 2110. Managing and controlling will need to evolve from a strict replacement of traditional linearly wired environments (SDI). This will still take SMPTE/NMOS some time to identify and to either standardize (or even agree) on some common practices. This work could push a final standard even more years into the future.

Ok, no more interoperability issues now that we have 2110 and NMOS in place, right? Not so fast, did you mention that your stream was HDCP protected? You need to transport control channels of RS232? CEC? IR? USB signals? How can it possibly work from Vendor A to Vendor B if there is no specification about these specific implementations?

SMPTE 2110 and NMOS do not specify an encryption mechanism. Data is accessible, end of story. While in a controlled facility like a broadcast studio that could be acceptable, in a typical pro AV environment like a corporate headquarters, it certainly is not. Content and control interfaces need protection against eavesdropping and misrouting data channels.

SMPTE 2110 is probably here to stay in the broadcast market, but it won’t fly in pro AV. It’s too expensive, it’s unsecured, it doesn’t interoperate automatically, and it’s cumbersome. It doesn’t yet cover many essential needs in pro AV and the engineers working on the standard are not from the pro AV industry, so are unlikely to address the unique requirements of pro AV installations.

So are you ready for my latest speculation? I predict SDVoE as the clear winner in the pro AV standards race (and 42 other pro AV companies with more than 170 shipping SDVoE-based products are on my side)! SDVoE was designed from ground up for pro AV applications – it’s self-described, self-discoverable, secured, interoperable and cost effective.

Stéphane Tremblay
Stéphane Tremblay is CTO of AptoVision products in Semtech’s Signal Integrity Products Group. He has spent his entire professional career leading the conception, development and productization of numerous AV, graphics and image processing technologies. In 2011, he co-founded AptoVision with the vision of transforming AV signal distribution by replacing proprietary switching equipment with off-the-shelf Ethernet equipment and has since led the AptoVision team in delivering on that vision with the BlueRiver series of products.
Recent Posts
Subscribe to our blog