Why doesn’t the internet use operators?

There are two well-known architectures used for switching electrical signals from sources to destinations: circuit switches and packet switches. A circuit switch is the simpler of the two. A circuit switch establishes an electrical connection (a circuit!) between a source and a desired destination (or destinations). A classic and easy to understand example of a circuit switch is the early telephone network. Trained operators used patch cords to create a temporary connection between the telephone at your house and the phone at your friend’s house. A single circuit spanned the distance, across miles and hundreds of telephone poles, until the operator removed the patch cords.

Since the early days of the telephone, the task of connecting the circuits moved to automated electromechanical relays, and then on to solid state digital switches. Those switches became faster and faster over time, and eventually evolved to transport digital rather than analog signals. But the basics are still the same: create a dedicated electrical link between a data source and a data destination, and let the information flow.

Why bother with circuit switches? 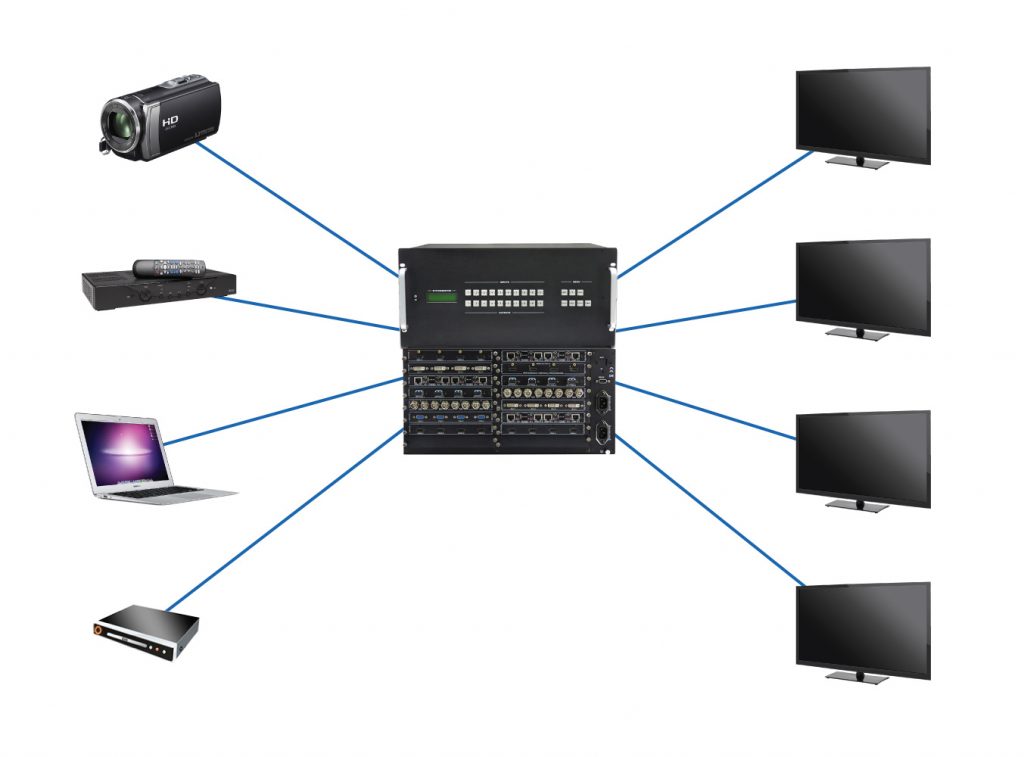 Circuit switches support star topologies, where all sources and displays connect to one central core. It is a challenge to stack and expand these switches.

From a perspective of the fundamental electronics, circuit switches are easy to develop and manufacture. Each communication link is fully dedicated to a particular communication, so delivery is guaranteed – if no line is cut. This is why every communication signal that needs to be switched (telephone calls, music, videos, text messages – the telegraph!) starts on a circuit switch.

A packet switch works differently. Instead of building a new circuit for every endpoint pair, each data link may be used to carry multiple communications. Data sources chop every stream of information to be delivered into pieces, called packets. Each packet includes a small piece of the overall communication, and each packet is labeled with its desired destination. A packet switch’s job is to read this destination information (the ‘header’) and move the packet closer to its destination. With enough packet switches working together, ultimately the packet reaches its final destination. 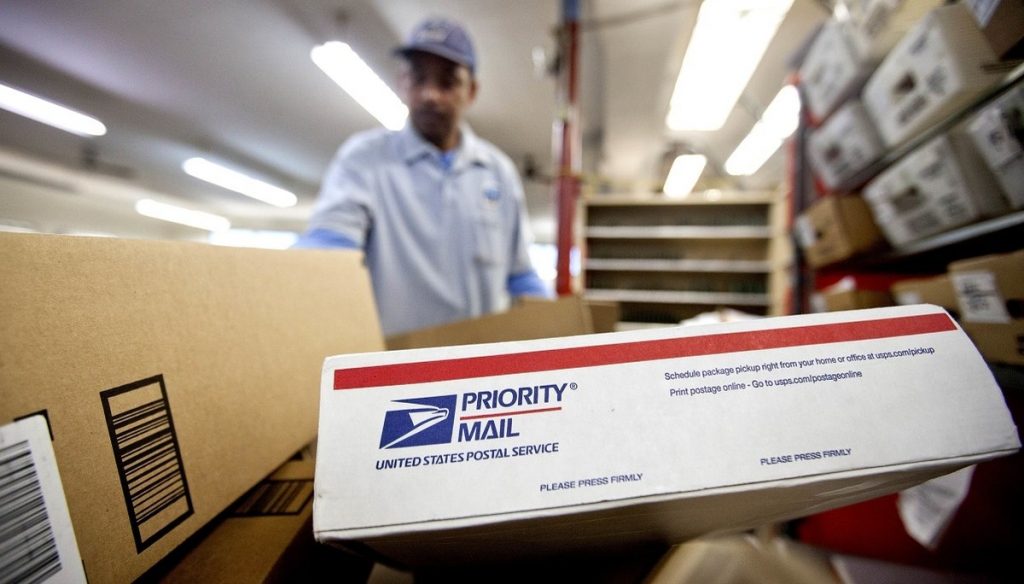 The postal service delivers millions of packets a day.

An easy to understand example of a packet switched network is the postal service. When you write a letter, you wrap it up in an envelope with the destination information written on it. At every step in the delivery process, a ‘switch’ (in this case a postal processing facility) moves the packet closer to its destination. First stop is a local post office near the source. Next, a regional sorting facility which ships the letter on to a sorting facility that serves the destination. That facility distributes the letter to the destination’s local post office, which finally delivers to the destination itself. A system with the size and scale of the postal service could never work with a circuit switch architecture. Imagine stringing clotheslines from your house to every other address you might ever want to correspond with!

Of course the most important packet switched network on the planet today is the internet, based on Ethernet. Ethernet chops streams of data (emails, YouTube videos, Facebook posts, Linux installer files) into packets of around 1,500 bytes (ed note: this varies widely but I’m keeping things really simple for this short post) and tags the packets with a destination. Ethernet addresses are called ‘MAC addresses.’ A MAC address is six bytes long. Typically when written, a MAC address’s six bytes represented in hexadecimal notation and separated by colons. Example: 01:23:45:67:89:AB.

Every Ethernet switch between source and destination reads the destination MAC address for each packet it receives, and routes each packet to an appropriate port, based on that switch’s understanding of the network topology. Concretely, a switch maintains a list of rules like ‘send all packets destined for MAC address 01:23:45:67:89:AB to port 12’. Eventually, the last switch in the chain (like the final postal carrier delivering to your home) delivers the packet to the host at 01:23:45:67:89:AB, connected directly to that last switch. 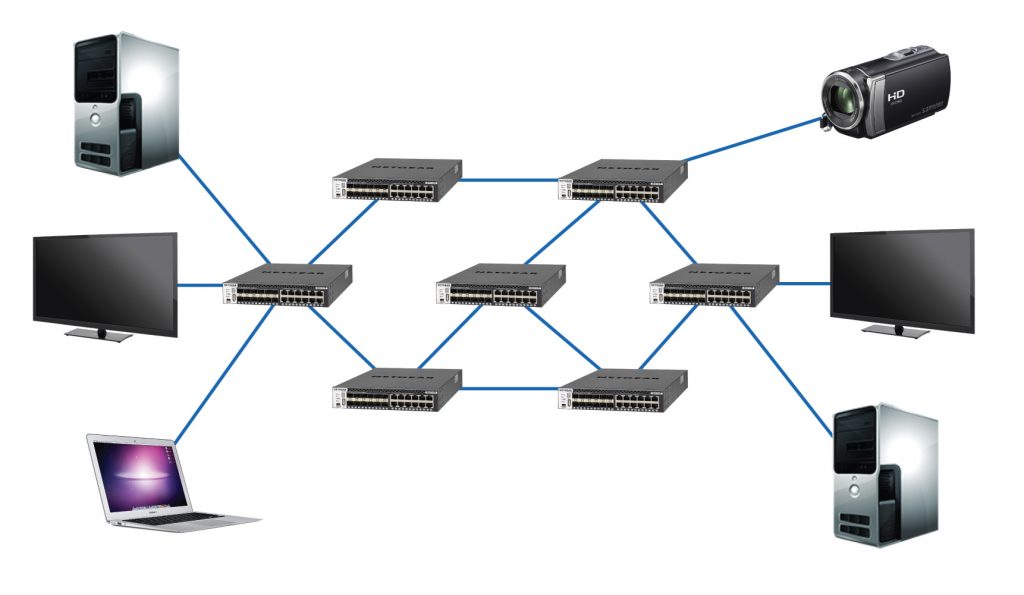 Packet switched networks – such as Ethernet – easily expand to massive scale. Each packet tells the switches where to send it.

Although somewhat more complex, a packet switched network has key advantages over a circuit switch. A packet switch is agnostic to data type. The packets could contain text, audio, video, or anything else. It is simple to mix data types in a packet switched network. By comparison, a circuit switch carries only one particular type of data. Multimedia environments (e.g., environments that mix audio and video) require multiple circuit switches in parallel. For example, one switch carries video and another carries audio. Having multiple types of circuit switches working together drives up costs – more switches and more cables to connect them. I have posted before about the huge cost advantages of Ethernet switches vs AV matrix switches.

Combining packet switches is simple and affordable. A single physical link between two switches allows them to pass arbitrary, changing data through one another, expanding the overall I/O reach of the network. Circuit switches are difficult to stack, because each link between switches may only carry one signal at a time. Exchanging multiple signals (e.g. two video streams) means multiple links between switches.

The scale of a packet switch is limited by how many different addresses it can process rather than how many I/O ports it includes. In the video world, a large circuit switch might support 100-200 I/O ports. A HUGE broadcast style SDI circuit switch might support 2,000 ports. By comparison, an Ethernet switch supports 281 trillion addresses. Considering the address space, and ease of stacking switches, there is no practical limit to the scalability of a packet switched network.

Justin Kennington
Justin Kennington is the president of the SDVoE Alliance and director of strategic marketing at Semtech, responsible for the company’s AptoVision BlueRiver chipsets for AV-KVM signal extension, matrix switching, IP-based switching, video wall and multi-view applications. He was formerly the technology manager of DigitalMedia™ at Crestron and is widely recognized as an influential technologist in professional AV. He received InfoComm’s Young AV Professional of the Year Award in 2014.
Subscribe to our blog
Recent Posts